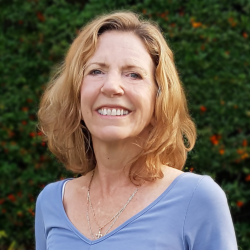 I developed multiple chemical sensitivity (MCS) when I was 43 years old.  Who would have known the body could take in sensory input and magnify it to the degree that I began to experience?  I taught chemistry and was in labs for approximately 13 years, being exposed to chemicals daily.  This was cumulative exposure over time.  I became a science coordinator and one of my responsibilities was to conduct campus safety walk throughs to ensure that the science storerooms were well maintained and stocked.  While visiting a campus I opened a nonventilated chemical cabinet that had been locked for ten years.  A cloud of dust and fumes were released into the air that I breathed into my lungs. The relentless coughing began.  I went to a minor emergency room hoping that they could help me, as the persistent coughing, burning eyes and sore throat would not subside.  From that day forward, I developed a chronic cough, flu like symptoms and multiple chemical sensitivity.

This was the beginning of the endless quest for answers.  Why was I so sick and how could I recover? I visited many doctors trying to determine what was wrong.  Can anyone give me a diagnosis or a prognosis?  No one had the answers.  I had been a very energetic, athletic person who ran 6 miles a day and overnight I had transitioned into someone who could barely get out of bed.  I continued to work, and my colleagues had no idea how ill I felt. I coped in my environment by holding my breath when people with fragrances walked by or when air fresheners were sprayed in bathrooms.  I became anxious and would experience rapid heart rate and heaviness in my chest for no apparent reason.  I ate lunch by myself in my office with the lights turned off, as the stimulation became too much.  This state of what felt like survival, became my new “normal”. Things remained this way until many years later when I finally found the Dynamic Neural Retraining System (DNRS), a drug-free, self-directed program that uses the principles of neuroplasticity to help reverse limbic system impairment in the brain.

During those long years, I lived in survival mode, and then I had another chemical exposure and my life began to sound like a chapter from a science fiction novel.  I remember walking past a TV and feeling a burning sensation in the left side of my head and body.  When I walked away from the TV, the burning would subside. What was this?  I asked my husband to google: “allergies to TV sets” and what came up was a condition known as electrical hypersensitivity syndrome (EHS). Naively, I thought that I could easily recover from this sensitivity, perhaps medication or a pill, to make the pain and burning in my body and head go away.  I made an appointment with one of the doctors and he told me that many people with this condition leave their homes and live in the country away from everyone and everything that creates their sensitivities.  I thought that this was a preposterous idea and I would instead go home and heal myself.  Move to the country?

I continued working as a campus administrator at a high school.  I was wired up with a walkie talkie, cell phone, telephone and computer in my office.  Talking on the telephone became difficult as it caused burning in my head.  Walking down hallways with fluorescent lights became unbearable.  I was beginning to struggle cognitively and would experience moments of brain fog.  I continued to become more and more sensitive to a greater number of electrical devices and my chemical sensitivity that was a 6 on a scale of 1-10 became a 10+ again.  My health was declining and  I eventually resigned from work.

I decided to go to Dallas, an area known for treating individuals with environmental illnesses.  I tried numerous protocols and the sensitivities became worse.  I was diagnosed with heavy metal toxicity, toxic encephalopathy and various allergies to foods.  I tried so many treatments with over 32 medical practitioners searching for an answer.  Some were allergists, MDs, DOs, nurses, a neurologist, a neuropsychologist, therapists, a urologist, a pulmonary specialist, a homeopath, naturopaths, a biological dentist, Lyme specialists, a massage practitioner, a building biologist and an EFT specialist.  If a treatment was available, I utilized it.  I tried the rotation diet, antibiotics, low dose antigen shots, glutathione by nebulizer, hyperbaric oxygen treatments, heavy metal chelation therapy, herbal treatments, rife machine, UV light exposure therapy, Ozone therapy, IR sauna for detox, vitamin C IVs, metal amalgam removal, EFT therapy, B-12 shots and neurofeedback.  Some of these treatments made me feel slightly better but frequently they made me feel worse.  The little energy I had was spent trying to get well.

We began remodeling our home, to decrease the reactions I was experiencing.  All plastics and carpeting were taken out of the house. Pieces of furniture were given away.  The entire ventilation system was removed and replaced with metal duct work and a whole house hepa filter was installed. Two additional mobile hepa filters were also used. I was limited to mobilizing in several rooms of the house due to the radiation that I felt from our neighbors Wi-Fi.  My husband did the cooking with hot plates in the laundry room.  The kitchen refrigerator was moved to the garage as I had become so sensitive I could feel the compressor when it would cycle on and off.  The circuit breakers were turned off so that I would not feel electrical current in the walls.  I could no longer drive due to the EMFs that were being emitted by the car electronics.  My husband would drive me to medical appointments in a van with a shielded cage like structure inside (similar to a Faraday cage to block EMF exposure). Many of the van fuses were removed. I woke up at dawn and went to bed at dusk.  Natural light worked for me. Holding flashlights caused me pain. I was homebound because going outside created discomfort and burning in my face due to a cell tower in the distance and the antennas erected in the neighborhood.  If I went outside I would wear a mask, as I was becoming sensitive to any air that had not gone through hepa filtration.

During the time of the house remodel I camped outside in the backyard.  I was bit by a tick while camping and developed additional flu like symptoms.  I went to the doctor and began multiple rounds of antibiotics to no avail.  I now moved into the Lyme world and had to do lots of research and I tried multiple therapies.  At one point a practitioner told me that all forms of the Lyme were gone, however, my body was not sending me this message.  I still had many of the same symptoms.  I spent most of my time in bed crying or sleeping.  I developed sensitivities to foods as I was avoiding any type of food that would feed microbes, like fruits, sweets and bread.  If I ate any of these the symptoms would increase.  My diet became smaller and smaller and I began rotating foods, not eating the same food within 3-4 days.  My husband was now my full-time caregiver as I became completely homebound and my dog Angel became my constant companion.  We hired a person to come several times a week to assist with chores and computer work.

We spent over $100,000.00 out of pocket on medical treatment as medical insurance would not cover these expenses.  I was very sick and there was only one solution left, so I thought, and that was 100% avoidance.  Where to go?  We decided to purchase 9 acres in the radio free quiet zone in Green Bank, West Virginia.  This area has no cell phone reception.  We built a house that had an electric/non-electric side, with an atrium in between to create distance and limit electrical exposure.  We had demand switches installed throughout the home and had a propane refrigerator in the kitchen, vented to the outside.  The house had high ceilings and lots of windows so that natural light would be utilized instead of electricity.  We had 4 organic gardens and began raising chickens.  I could mobilize outside the home as I could no longer feel Wi-Fi or cell phone radiation.  I did not go into town as I was still reacting to overhead power lines and antennas.  I did not attend church for years because of the Wi-Fi, electrical and chemical exposure possibilities. Avoidance was not the solution. I was still sick and I began to develop additional sensitivities. I still needed a cure.

Next:  Finding The Answer

Next: Finding The Answer